When I attended my AAM training a few years ago, I remember I barely understood what I was explained. To me, it was all new. The technicalities were not that difficult, but when the trainers explained the business side, I stopped following the course; it was all gibberish to me. It took me a couple of years to get a reasonable understanding of the display advertising industry. Since then, colleagues and customers have asked me to explain them how this industry works, so I thought I would write a “display advertising introduction for dummies” post. I will omit a lot of parts and will simplify it. If you are well versed in this area, I suggest you skip this article, as it will not offer anything new to you. In fact, you may even know more than me!

Of advertisers and publishers 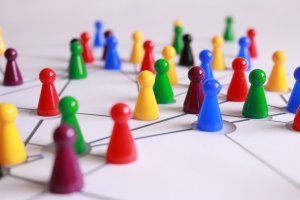 Let’s start with the very basic: the problem we are trying to solve. One the one hand, we have publishers, with appealing websites that attract thousands or millions of visitors. Most of the publishers have realised that the only way to monetise their content is through advertising, so they have in most/all of their pages, areas where banners can be inserted. On the other hand, we have advertisers, companies willing to put their ads in front of the potential customers and pay for it.

So, the question is: how do we marry advertisers and publishers? The answer is: the display advertising industry.

In the beginning, things were really simple. The advertiser would call the publisher and negotiated all aspects: where to put the banners, sizes, duration, price… In a world with a handful of advertisers and publishers, this approach works, but the moment you have hundreds of them, this becomes impractical. However, do not think that this simple relationship has disappeared. You can still see it on certain occasions, for example, when a newspaper fills the full homepage with an ad.

This industry has been evolving over time and has become more specialised and sophisticated. Instead of this direct connection between advertiser and publisher, now we have a large number of entities, each of which has a limited scope. However, the borders between the different actors is blurry, as there are no standards and many companies try to expand their businesses. I must admit that I do not fully get the whole picture, but I know enough to provide with an initial overview.

The following is a brief description of the most important actors:

As I have said, this is a short summary. If you put it in a, more or less, straight line (except for the ad server), you get something like:

If you want to see the big picture, the most popular picture is the “Lumascape”: 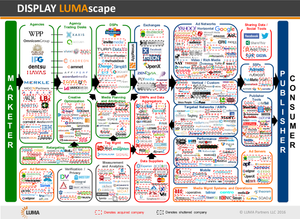 Try to find Demdex (now Adobe Audience Manager), Omniture (now Adobe Analytics) and EfficientFrontier (now Adobe Media Optimizer). I find this image too crowded and difficult to follow, though. I recommend the following interactive diagram: http://www.displayadtech.com/the_display_advertising_technology_landscape/the-display-landscape. It seems to only work with Chrome and to navigate, you need to use the buttons on the bottom-right of the screen. If this is the first time you have seen the previous 2 diagrams, you are probably surprised by the amount of players. Remember, initially, the publisher and the advertiser were almost touching each other; now we have many mouths to feed, but the system is more efficient.

Ways of buying and selling

Not only there are multiple players, but the ways of doing business are also diverse. In general, there are three approaches in buying and selling ad inventory.

With these options, what usually happens is that an advertiser starts by selling its premium inventory directly. Then it will package the remaining of inventory and sell it in private auctions. However, it is very common to have lots of unsold inventory, which the publisher tries to offer via RTB. In other words, with the combination of these three broad options, a publisher will monetise as much as possible his assets and the advertiser has many more places where to put his ads, at different prices.

How an ad makes it to the final user

So far, I have only explained how to connect the advertiser with publisher: the technology behind and the negotiation options. There is one final detail: how the end user, the visitor to the publisher’s website, gets an ad. In the case of direct and packages, it is fairly straight forward: when a page loads, the publisher will randomly choose one of the advertisers that is paying for that particular page. However, the case of RTB is much more complex. I could spend the next 30 minutes trying to explain it to you in text, but the following video explains it in a very clearly:

As final remarks, remember that I have tried to simplify the reality, to make it more understandable. As you gain knowledge of the display advertising industry, you will see how the reality actually is.