The Adobe Experience Platform Web SDK was introduced some time ago. I do not remember exactly when, but I have not had the time to work with it until very recently. Now that I have finally started to get my hands dirty with it, I will start writing about it. However, before I get into the how, I want to start with the why and the what.

While there are multiple reasons why Adobe developed this new library, I would highlight two: simplify the deployment of code and the advent of the Adobe Experience Platform (AEP).

The Adobe Experience Cloud (AEC) has been based on acquisitions. From Omniture more than 10 years ago to Marketo just over 2 years ago. Even these acquired companies came with their own baggage of acquisitions, like Touch Clarity. The obvious consequence was that each product was developed in isolation, with its own JavaScript library and edge servers. A typical website that includes the whole AEC has the following code:

In summary, we talking of 4 libraries (and some modules) and 3 sets of edge servers. 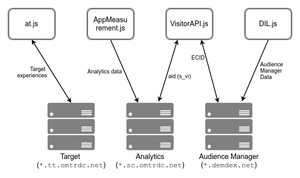 As a developer, you have to learn these libraries and modules and the browser needs to make multiple calls to Adobe servers. Personally, I do not think that these pose any problem, but not everybody thinks like me.

I have already introduced AEP (part 1 & part 2), but I barely scratched the surface in these 2 posts. One of the novelties introduced by AEP is that all data should conform to the Experience Data Model (XDM). Therefore, a new library was needed to send behavioural data from the browser to AEP. You could think that the current data could be converted into XDM and you would not be alone. However, the XDM is complex and conversions are not easy. In a future post I will talk about it and you can then judge for yourself. In other words, the existing libraries are not fit for AEP.

If you have followed me so far, it will be no surprise to you if I tell you that the solution was to create a completely new library, code name Alloy. This is not a combination of all the existing libraries, with some extra code for AEP. This approach could simplify the hosting of the library, but it would not tackle any of the previous issues. It is a completely new implementation, developed from the ground up.

But this new library does not try to mimic the behaviour of the legacy libraries. The whole solution goes one step beyond. Adobe has set up a new collection of edge servers, distributed world wide. This is what we call the Unified Edge.

And here is where the magic happens. The Web SDK makes one call to the Unified Edge and it is the Unified Edge who takes care of all the underlying interactions. It calls ECID, Analytics, Target, Platform and/or other servers, depending on how you have configured it. You will notice that I have not mentioned Audience Manager, as server-side forwarding is still used. With the responses of these other edge servers, it combines all the responses and sends it back to the Web SDK library. 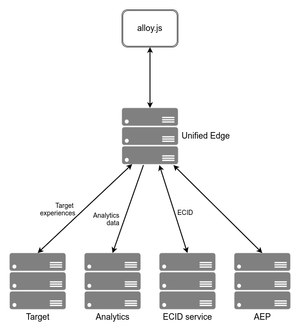 With this initial explanation, you may be interested in trying it out. However, before you proceed, there are some additional thoughts I would like to share with you.

So, after you know you need the Web SDK, you are now eager to get your hands dirty. You should be aware that the library is Open Source and it is readily available in Launch (and I guess other tag managers). However, the edge servers are not open to everyone. I would start by asking your Customer Success Manager if you entitled to use the edge servers and, if so, request the provisioning.

As you can imagine, with what I have explained, you cannot even start the configuration. In the coming weeks, I will show how to do a basic implementation with Web SDK. Stay tuned!

Photo by Lukas from Pexels